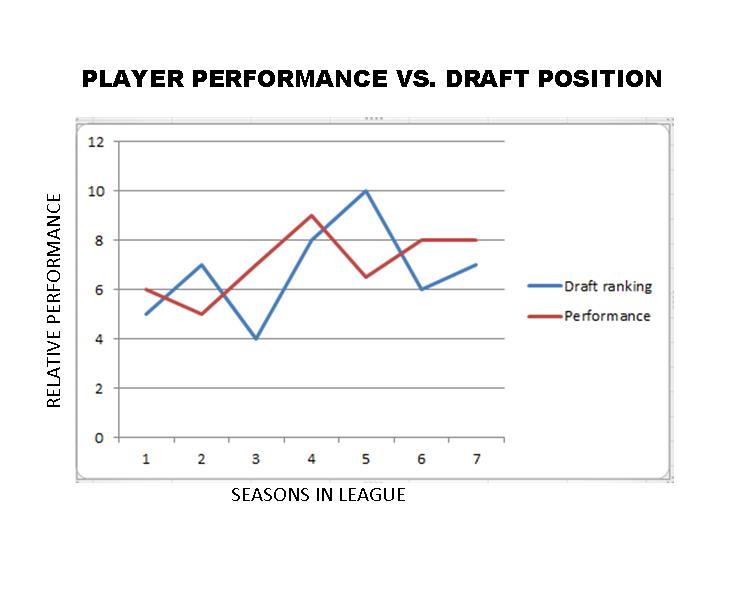 There are a number of moving parts to consider when deciding to take a player in the draft.  However, there are some general rules you can use to determine if that player is a good choice for your fantasy team.  These rules are based on how many seasons the player has been playing professional football.  The attached chart shows the relative draft value (blue line) versus the fantasy output (red line), when the blue line is above the red line, that signifies high risk and disappointment.  However, when the blue line is below the red line, there’s a real opportunity for a solid fantasy output from that player!

Year 1:  You are 100% speculating when it comes to rookies!  As much as Cowboys fans are raving about how incredible Ezekiel Elliot will be this season, they have no idea how he’s going to perform and hold up when elite athletes are chasing him around the field.  That is why it’s so hard for me to draft any rookie before pick #60.  Right now Zeke’s the only rookie in the top 60 but I expect to see players like Josh Doctson, Laquon Treadwell and Derrick Henry creep into the #40 – 60 range once pre-season starts.  At best these guys are a 50/50 coin flip so be wary about taking them early,  but I love taking rookies starting with my seventh pick.

Year 2:  The Sophomore Slump is Real!  If a player comes out and plays decent their rookie season, speculation about how much they’ll develop in year two will skyrocket and so will their draft position.  Look at players like Amari Cooper (from #54 to #25) or Todd Gurley (from #68 to #7).  Both had promising seasons, but have expectations overshot what they can do in year two.  Many players regress in their second year, look at Keenan Allen in 2014 or Andrew Luck in 2013.  Notable sophomores include:  David Johnson, Todd Gurley, Amari Cooper and Jameis Winston.

Year 3:  Third Year players are a terrific bargain!  Once players have laid an egg in their sophomore outing, their ADP plunges and you can get a great bargain.  These players are older, wiser and are better able to handle the highs and lows that come with playing in this league.  Here’s some notable players entering their third season:  Allen Robinson, Sammy Watkins, Carlos Hyde, Allen Hurns.

Year 4 or 5:  The contract year will offer career best numbers.  At this point you will see their draft value rebound strongly but the chances for the player outperforming even their lofty expectations is very high.  Look at Julio Jones, besting his 2014 1,593 yard, 6 TD output with a 2015 contract year monster 1,871 yards 8 TD outing.  These players are guys you need to target and that’s why you’ll see the golden dollar next to their name on the My Perfect Fantasy Draft app.  Examples for 2015 include:  Le’Veon Bell, Alshon Jeffery and Eddie Lacy.

Year 5 or 6:  The Big Contract Slump.  I talked about this in detail here.  Many players will see their output fall to somewhere between what they achieved between year two and three.  However, their draft value will continue to rise based on the outstanding prior year stats.  This makes these players very risky and you should avoid them at all costs.  Examples include:  Julio Jones, Doug Martin and Jordan Reed (just signed a big contract extension during the offseason, bypassing the contract year).

Year 6 or 7:  Second Redemption.  Another strong rebound the second season after being awarded a big contract.  Once again the draft value will plunge because that star player had a bad season, but these are still elite players and they will rebound strongly back to what you saw before that big contract renewal was offered.  Examples include:  Dez Bryant, Demaryius Thomas and Randall Cobb.

Year 7 - 8:  Balance.  Two seasons after their contract year, you will find a nice balance between their draft position and expected output.  These guys have established themselves as leaders and veterans in the game.  These players are worth their weight in gold because they’ve done and seen just about everything at this point.  Notable players at this level include:  Antonio Brown, Rob Gronkowski, Cam Newton, Julian Edelman.

Remember, this is in general.  There are certainly players that perform great in their second season (Odell Beckham Jr.) and there are players that completely blow it on a contract year (Alfred Morris), but in general players will follow this sequence and you can eliminate a lot of risk from your draft if you avoid players on these high risk seasons!

Want to easily remove the high risk players from your draftlist?  Use My Perfect Fantasy Draft and use the filters for Sophomores and Big Contract Slump to get those guys off your list.  Get the app today for only $5!