You Are Here: Home » Vlog » Fantasy Strategy: Why it pays to wait to take your Quarterback

Fantasy Strategy:  Why it pays to wait to take your Quarterback 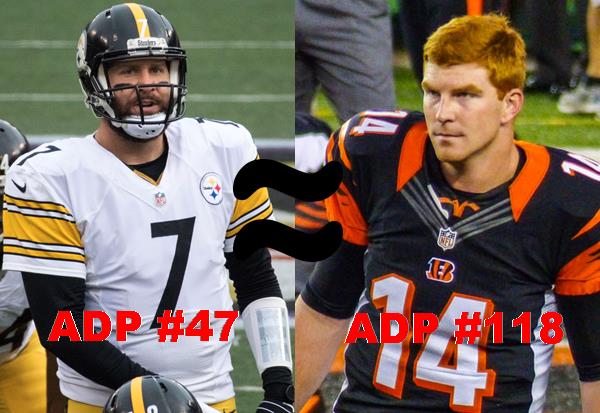 The fantasy outlook for quarterbacks this season looks like the American West.  You start out in the Rocky Mountains with the first four guys off the board:  Cam Newton, Aaron Rodgers, Russell Wilson and Andrew Luck.  These guys will provide you with a week to week advantage in their performance over other quarterbacks.  However, these guys will cost you as you will have to take one of them with your first four picks, passing up extremely valuable running backs and wide receivers in order to get them.

However, once you reach the 5th quarterback,  the projected value completely levels out like the great plains that stretch out a thousand miles from Denver to the Mississippi River .  This means that Ben Roethlisberger (ADP #48) will get you approximately the same number of points each week as someone like Andy Dalton (ADP #118).  Look at the attached graph:

The top 4 guys are projected to get you 20 or more points per week in standard scoring (25 pass yards= 1 pt., 4 pt pass TDs, 10 rush yards = 1 pt, 6 pt rush TDs, -1 pts INT).  However, everyone after that from Rothleisberger (ADP #46) all the way down to Andy Dalton (ADP #118) will get you between 16.94 and 18.95 points per week on average.  This means there is virtually no difference between quarterback performance, so you can wait to take your QB and it won’t hurt your team!  Shoot, you can bide your time all the way down to pick #128 and grab a perfectly acceptable QB1 in Kirk Cousins.

Looking at the chart above, the only guys I don’t like are the Sophomores, Jameis Winston and Marcus Mariota, as both are projected to average only 15.46 points per game in 2016.  Don’t let last season fool you, the success that Derek Carr and Blake Bortles had was atypical for 2nd year Quarterbacks.

The game has been transformed over the past decade to a pass happy system.  Ten years ago you would never see a game with 4 passing TDs, now their fairly common and you get a sprinkling of 6 TD games every season!  Prolific wide receivers are all over this league, just look at how deep the Wide Receivers are on the Top 200 draft lists.  You can get legitimate WR2s into the 9th and 10th round like Marvin Jones, Michael Crabtree, DeSean Jackson, Kevin White, and Markus Wheaton.

I recommend using your first 9 rounds to load up on Wide Receivers, Running Backs and a decent Tight End.  Then use your 10th pick to get a guy like Derek Carr who has some significant upside this season.  Either that or get a seasoned veteran like Philip Rivers one round later.  You’ll be glad you did and your team will be that much stronger for it!

Do you want to know when your favorite quarterback is getting drafted this season?  Then you need the “My Perfect Fantasy Draft” app to let you know when you need to get him!  This app can also help you determine which QBs are the most consistent and most reliable to you can get the best guy possible for your fantasy league.  Get it today for only $5