You Are Here: Home » Vlog » How To Pick a Quarterback

How To Pick a Quarterback 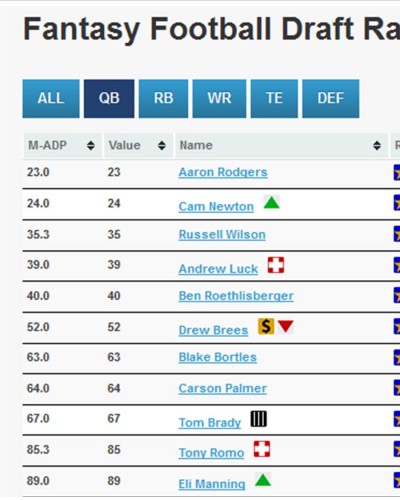 I’m sure you’ve noticed that the Quarterbacks don’t get valued the same way as other players, why is that?  In My Perfect Fantasy Draft (MyPFD) the QB value is always the same as their rank regardless of how that league scores points.   I did this because Quarterbacks are valued and selected differently than all the other offensive players.

In most leagues, the Quarterback will score more points than any other player.  If we valued them the same way we value running backs and wide receivers, all the QBs would be at the top of the list and they would be the first player you selected in the draft.  However, we know this is not the case (unless you’re playing in a 2 Quarterback league).

Instead you have Quarterbacks sprinkled throughout the list and they go a few at a time with the final QB1 being selected in the 9th or 10th round.

I’ve also noticed that it doesn’t matter how the QB points are scored.  They still get selected in the same order at about the same pick in every draft.  Sure, Ben Roethlisberger may get selected 40th in league A and 43rd in league.

This means you need to be strategic and choose which Quarterbacks you want to target in advance and then know what round you will need to select them in.

Sometimes it’s just not going to make sense to target a certain quarterback.  Let’s say in this same scenario you really want Russell Wilson.  Wilson is currently being selected with the #35 overall pick.  There is a chance he could still be available in the 4th round when you pick at #37, but if you really want him you would need to take him with your 3rd overall pick at #24.  That makes him a very expensive proposition when you consider the caliber of players you will have to pass up.

I never like to stretch to reach a QB.  There will be plenty of opportunities to find one who should still be available when you are picking.  In the above scenario, Andrew Luck (#39 overall), Tom Brady (#67) and Eli Manning (#89) are all being selected just after your picks in the 4th, 7th and 9th round.  You should be able to get one of them easily.

On the other hand Russell Wilson (#39), Drew Brees (#52) and Blake Bortles (#63) are all poorly positioned for your place in the draft.  Meaning you will probably have to reach with an earlier pick in order to grab them before someone else does.

Success in drafting is all about taking the right player at the right time.  Don’t reach with Quarterbacks, find the ones that work best with your position in the draft and target them.  Last season I created a Quarterback Matrix to show which players were good choices and which were bad choices depending on your draft position.  I will update that list for the upcoming season to help you make the best choice for your team!