You Are Here: Home » Vlog » Is Marvin Jones the best bargain wide receiver in the Fantasy Top 200?

Is Marvin Jones the best bargain wide receiver in the Fantasy Top 200? 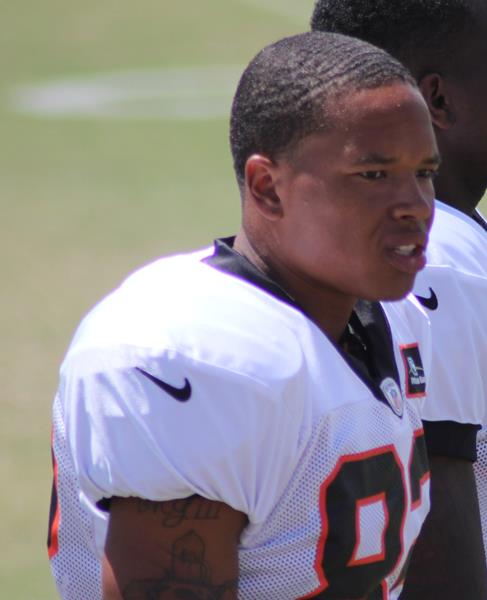 Even though Marvin Jones has played well during his NFL career, he's never really been fantasy relevant.  Playing behind someone like AJ Green will do that to you.  Still, he has been solid and consistent during his tenure at Cincinnatti and he caught 65 balls for 816 yards and 4 Touchdowns in 2015.

So now he has moved to the Detroit Lions and I really think he has an opportunity to shine.  The first reason I like this move is that Detroit throws the all a lot more than Cincinnatti does.  Last season Matthew Stafford threw 128 more balls than Cincinnatti did.  That means there will be a lot more opportunities heading Marvin Jones' way.

I also expect Jones to take over Megatron's position as the #1 wide receiver in Detroit.  I expect to see his opportunities to increase from 108 last season to the 140s in 2016.  Based on his efficiency and yards per catch, this means we could see a 1,200 yard, 7 TD season, which puts him solidly in the WR2 category and you can get him in the 11th round (current ADP is #102 overall)!

Based on his current projections, his value is #18 overall in Points Per Receptions leagues and #34 overall in standard points leagues.  This is a screaming bargain and you need to get him on your team!

Clearly, Marvin Jones is no Calvin Johnson, and I don't expect him to replicate what he did.  But when you look at the middle rounds of the draft (rounds 7-12) this is where you want to find guys with a ton of upside.  Last season you could get guys like Cam Newton, Davonta Freeman and Jarvis Landry and Todd Gurley in these rounds and when you can get a guy who's an every week starter it makes your team all that much stronger!

Want to see how Marvin Jones stacks up against all the other receivers in the draft?  Check out My Perfect Fantasy Draft and rule your league on draft day!  It only costs $5 and it will give you the edge you need to win your draft this season!