This is a blog following my PPR league in the final weeks of the season.

If you want to see what happened during the rest of the season, click here

AAAAAAAAAAUGH!  I just can't believe what just happened.  The afternoon games went much better than expected.  Not only was I able to close this 40 point gap, I managed to have a 7 point lead with less than 2 minutes left in the Seattle/Arizona game.

So what happens?  Russell Wilson throws a meaningless touchdown late to Jermaine Kearse (not Doug Baldwin) and you can see the final score below.  Neither of us has any players going tonight or tomorrow so this thing is over. 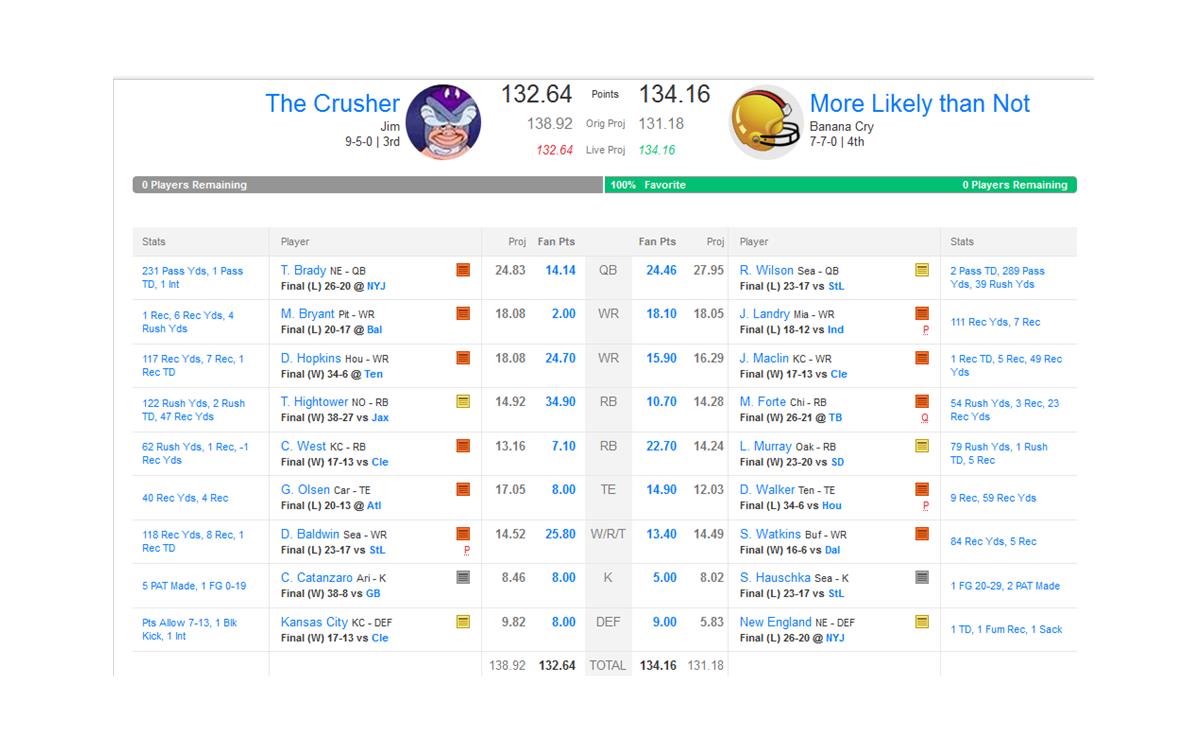 So I end up losing by 1.52 points!  I just can't believe it.  I thought I was totally out of this game and to come back like that (thank you Tim Hightower and Doug Baldwin) and to lose it by so little.  But who knows, there might be a stat correction that could turn the game back to my favor.

Well it looks like it's not going to happen this year in this league.  I needed big performances from all my guys and instead I got disappointing results across the board including losses by both Carolina and New England. 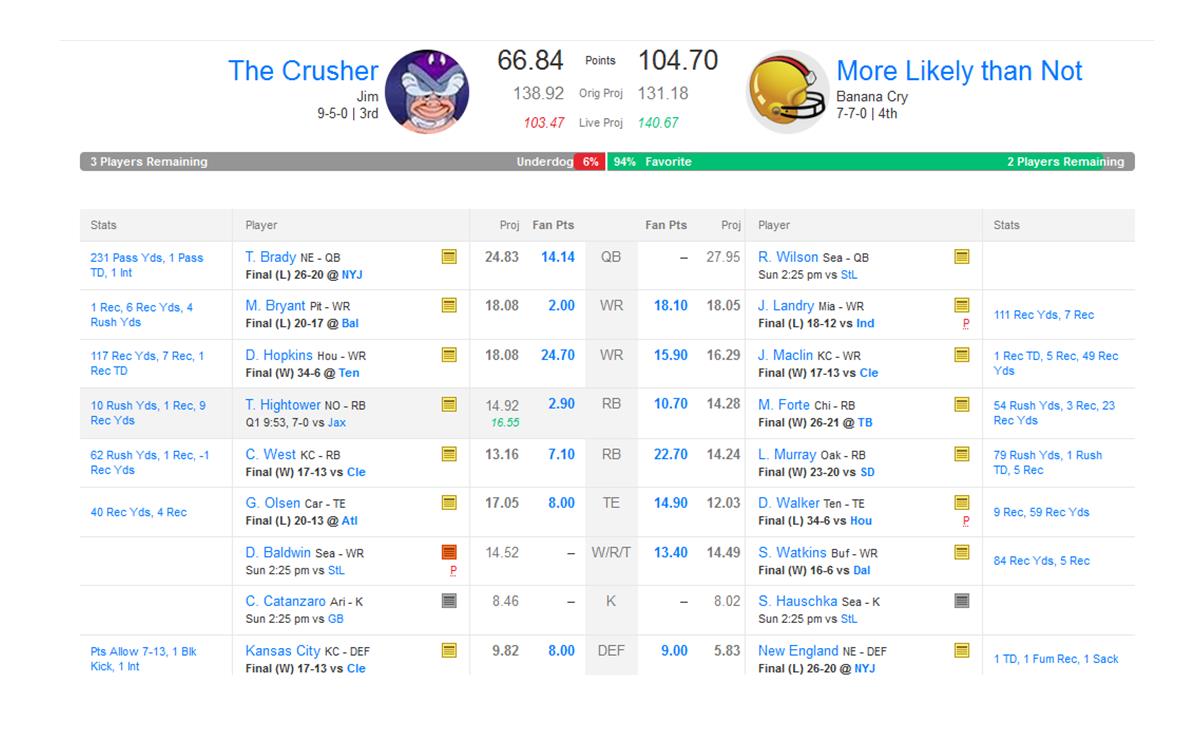 I don't know what happened to Martavis Bryant as he was invisible the entire game.

Oh, yeah!  Championship day is here.  The winner will be known by the end of the day today as neither of us has anyone playing on Monday night.  Here's the matchup:

My opponent has been playing so good I'm going to need huge output from all my players to have a chance.  I'm am concerned with Doug Baldwin being questionable, but I picked up Michael Floyd from Arizona just in case he doesn't play.

Of course Latavius Murray had a great game.  79 rush yards and a rush TD and 5 catches for 39 yards.  So he ends up with a very impressive 22.7 points and now the projections are pretty much dead even (I have 140.43 and he now has 139.10).  This team has been absolutely annihilting it this past month.  Last week he scored 174.86 points so I need all my guys to really go all out if I expect to have a chance to win the championship.

Neither of us have anyone playing in Saturday night's game between Washington and Philly.

It also looks like neither of us has anyone playing in the Monday night game between Denver and Cincinnatti, so it will be nice that we don't have to wait an extra day to see who wins this thing.

My kids are getting excited for Santa right now!

I don't have anyone playing in tonight's Oakland/San Diego game.

My opponent is playing Latavius Murray tonight.  Looks like a plum matchup, but I'm hoping otherwise.

I've moved Doug Baldwin into my flex position as he is listed as questionable right now.  I want to be sure to have maximum flexibility should I need to replace him on Sunday.

Tim Hightower did respectable on Monday night, getting me another 11.5 points, so I end the week with 137.78 points.  That is just shy of my team projections and is not bad considering Amendola didn't contribute at all.

YEAH!  I am going to the championship game!

Doug Baldwin continued his red hot streak catching another 2 touchdowns and scoring me another 20.5 points.  AJ Green did not repeat his performance from last week (where he scored 25.2 points) and only ended with a paltry 4.7 points.

In the evening my kicker, Chandler Cantazano, gives me another solid day with 9 points.

I end the day with 126.28 points with Hightower still to play.  My opponent is only able to score 103.98 as Peterson, McCoy and AJ Green all have a horrible day.

The initial projections show me with a slight advantage (137.99 to 133.28), but it's all going to come down to who has a better day next Sunday!

Tom Brady has a rock solid game, but here's the think with Brady.  Once he gets a sufficient lead, he stops producing for fantasy purposes.  He had 19 points at the half but ended the game with a disappointing 22.68 points (5 under his projection).

Danny Amendola, who I slotted in this morning, left the game with an injury and did not return.  He ended up with negative 0.7 points as he also lost a fumble.  This would have been devastating but on the other side, my opponent was playing LeSean McCoy who also left with an injury and didn't return.  McCoy only earned 4.7 points before leaving, so the damage is somewhat limited here.

Charcandrick West was back to his RB1 ways with 76 rush yards, a rushing TD and 2 receptions for 9 yards.  He slightly exceeds his projections and gets16.5 points.

Greg Olsen was also slotted in this morning in favor of Gary Barnidge and he delivered with 6 receptions for 79 yards and a TD for 19.9 points.

DeAndre Hopkins had a solid game, but a TD would have been better.  He slightly underperforms with 8 receptions for 94 yards and 17.4 points.

The Kansas City defense dominates this whole game and gets 21 points.

I end the early games with a monstorous 96.78 points and I am basically even with my opponent who scored 99.28 points but only has one player remaining (AJ Green).  I still have 3 players to play including Doug Baldwin (playing now and kicking ass), Chandler Cantazano (playing tonight in the ARI/PHI game) and Tim Hightower tomorrow.  I hope this is all wrapped up after the afternoon game and I punch my ticket to the championship game.

Oh, man!  Gameday is here and I'm as giddy and nervous as a schoolgirl!  I just think this is such a great team and I've got such fantastic matchups this week there is no way I can lose.  However, I'm playing the #2 team and they also have a rock solid lineup.  The only thing is his team is very dependent upon one team, the Jacksonville Jaguars, who have been red hot lately and have a cherry matchup against the Falcons.  He is starting Bortles, Allan Robinson and Denard Robinson, if they have another game like last week (scoring 51 points) then I will be at a distinct disadvantage.  I can just hope that Atlanta can be competitive and keep the game low scoring.  Here's the lineup 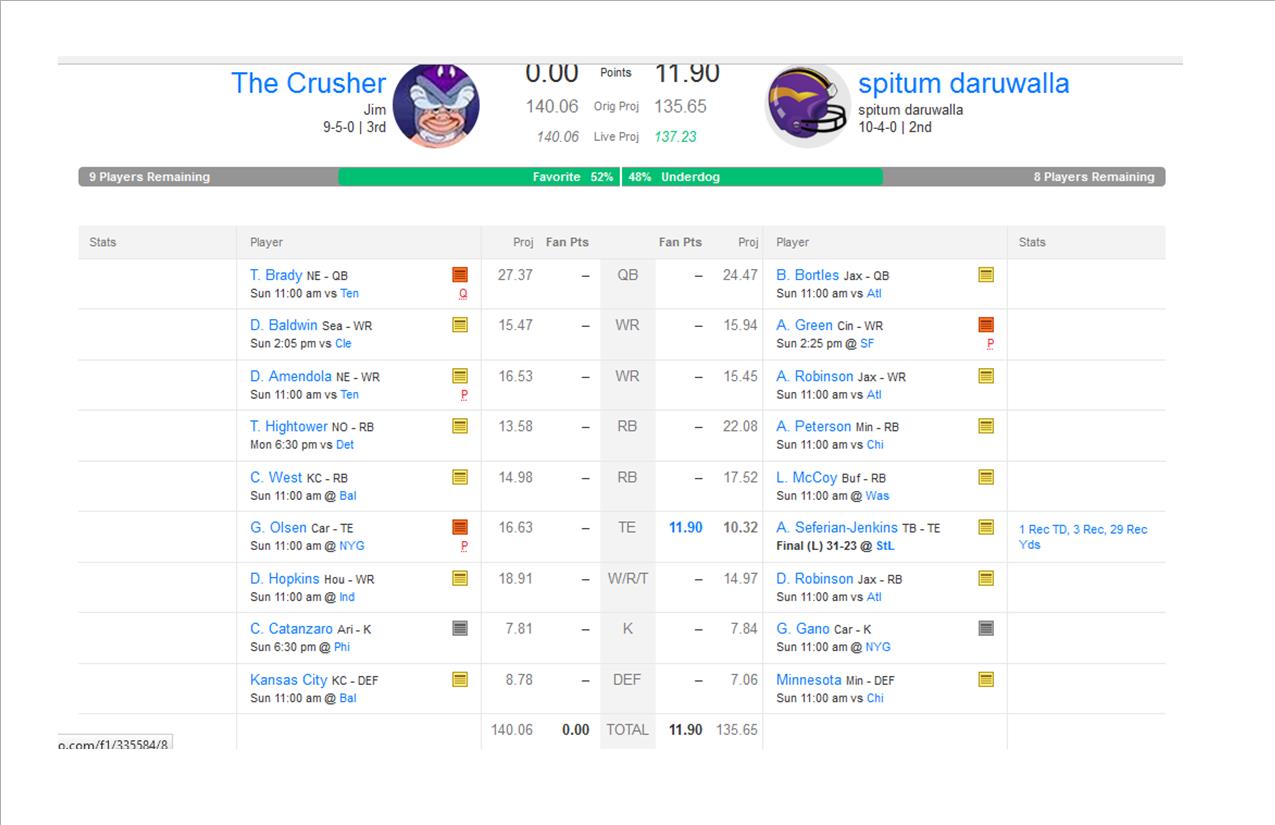 I did end up making some last second moves as I put Greg Olsen back into my lineup as he is a full go today.  I also put back in Danny Amendola now that I know Edelman is not coming back in today's game.  Even though I like the matchups with Golden Tate and Gary Barnidge, I'm just feeling better about these other guys.

Well,  ASJ was rolling with 2 points in Thursday night's game with 6 minutes to go, so of course he scores a touchdown in garbage time for Tampa Bay and gets 11.9 points.  So now my opponent has a slight advantage over me with his projection now at 137.23 to my 135.87.

I don't have anyone playing in the St. Louis/Tampa Bay game tonight.

My opponent is playing Austin Serafin-Jenkins as his TE because Tyler Eifert is out this week.

This weekend is going to be close.  Right now I have a projected score advantage of less than 2 points!

I had a very disappointing week 14, but I did get the win (barely).  The good news is that my bench went nuts!

WR - DeAndre Hopkins had another dud game with only 3 catches for 52 yards, 8.2 points.  Hopkins has been an extreme disappointment and now his QB, Hoyer, is going to be out for a while.  He has a nice matchup this week, though, against the Colts.

RB - Charcandrick West, and the entire Chiefs offense, had a total dud of a game with only 54 rush yards, 5.4 points.  A timeshare nightmare, I think he's going to have to get benched.

TE - Greg Olsen survived a scare but did get 3 catches for 52 yards before exiting in the second quarter, 8.2 points.

FLEX - Martavis Bryant had 7 catches for 49 yards and 12 points.  Pittsburgh plays Denver this week, so Martavis is going to my bench against that defense.

K - Cantanzaro has another great game with 12 points!

DEF - Kansas City was a great pickup as they end up with 14 points!

The real story was what was happening on my bench:

Randall Cobb had his best game in weeks getting 8 catches for 81 yards and 17 points.  I still don't think I can trust him, maybe if he has another big week in week 15.

Gary Barnidge got 5 catches for 81 yards and a TD, 19.4 points.  Given the high probability of Olsen sitting, I think I'm going to give Barnidge his first start.

Golden Tate has been really good these past 4 weeks, he got 9 catches for 60 yards and 2 TDs for 28.5 points.  I think I'm going to start him

Doug Baldwin was an awesome pickup as his hot streak continues, 6 catches, 82 yards and 3 TDs!  32.2 points.  He's a must start this week against Cleveland.

Zach Miller, another last minute pickup, was hot with 5 catches for 85 yards and a TD and gets 19.5 points.

I did not end up hitting my goal of getting high points for the season but I did end up scoring the second most points, so that's good.  Both the teams above me also won so I stayed #3 in the rankings and finished the season 9-5.

Here's my lineup for week 14, the final week of the regular season

Right now I'm projected to score 25 points more than my opponent, so I'm feeling pretty good today.  If I can score 30 points more than the #1 team does, I will take the high points for the season!  That's what I want to see happen today.