You Are Here: Home » Vlog » The Top 5 Running Backs for your Points-Per-Reception (PPR) Fantasy League 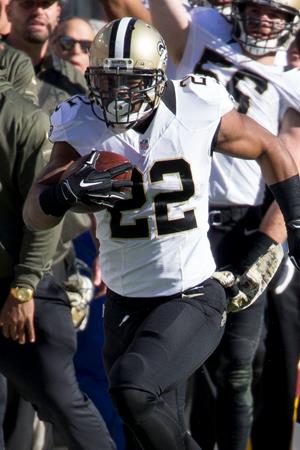 A few days ago I posted on facebook asking who people would pick with their third round draft choice.  I put up 4 players that are currently being picked between pick #26 and pick #30:  Eddie Lacy, Mark Ingram, Sammy Watkins and Keenan Allen.  I was surprised to see many people say they would target Eddie Lacy for their PPR league.  In fact, if you are in a PPR league you actually should target Mark Ingram.  Why?  Well the biggest reason is that Ingram is projected to catch 50 passes this season, whereas Eddie Lacy is only expected to catch 20.

You need to tailor your draft strategy to getting the right players on your team.  That means if you’re in a PPR league you want to draft backs that are going to get you the most catches.  It’s pretty simple, if you have two backs and one gets 1,400 yards on the ground and the other gets 1,000 on the ground and gets another 40 catches for 400 yards, the second player is going to be a lot more valuable (and get you a lot more points) for your PPR fantasy team even though their overall production is the same.

Here are the best running backs for PPR in 2016:

#1  David Johnson (RB, ARI) -  Caught 36 passes last season in limited action (28 of them happened in the final 5 games), expect him to get you between 3-5 receptions per week.  PPR value is #4 overall

#2  LeVeon Bell (RB, PIT) – Caught 24 balls in 6 games last season.  His reception percentage is ridiculously high, as he got those numbers on only 26 targets.  He also had 2 games last season where he caught 7 balls.  His PPR value is #5 overall.

#3  Devonta Freeman (RB, ATL) – Last season’s second best PPR running back with 73 catches for 578 yards (Danny Woodhead was #1 with 81 catches).  Even though Freeman will not get you the ground yards like Johnson or Bell above, he will certainly make up for it through the air.  His PPR value is #6 overall, but he’s getting drafted on the 21st pick!  A nice value play!

#4  Ezekiel Elliott (RB, DAL) – Of course everyone is just speculating given that Elliott has yet to make his debut, but this offense is built around targeting the running back.  Last season, Darren McFadden was targeted 53 times (hauling in 40 for 328 yards) .  In 2014 DeMarco Murray was targeted 64 times (hauling in 57 for 416 yards).  I would expect a similar level of targets from Tony Romo this season.  His PPR value is #11 overall which is very close to when he’s going in the draft.

#5  Mark Ingram (RB, NO) – Last season, Sean Payton made an extra effort to emphasize targeting his running back.  Because of that, the number of targets to Ingram nearly doubled from 36 in 2014 to 60 last season.  This is more impressive given that Ingram only played in 12 games.  If we annualize that out Ingram could be the target 80 times in 2016!  Just like Freeman, Ingram is available at an incredible discount right now as his value is #12 but you can get him with the 26th pick overall.

The other backs in the top 30 including:  Todd Gurley, Adrian Peterson, Jamaal Charles, Lamar Miller, Doug Martin and Eddie Lacy are all poor choices because they are not used as much in the passing game.  Todd Gurley is projected to get you just as many rush yards as David Johnson, but he’s only going to catch about 25 passes (average less than 2 per week).  Because of this his value in PPR leagues is #32 overall, which makes him a horrible choice for your first pick in a PPR draft!

Want to know how all the Running Backs are valued this season?  Then you need “My Perfect Fantasy Draft”!  This app will allow you to create a fully customized draftlist in minutes set to your league settings and your personal player preferences.  Get it today for only $5.