What is Draft Mode?

Success in the draft comes from knowing WHEN you need to take a player in order to be assured that they will be on your team. Draft mode is a custom filter that will break down the player list for each round of your fantasy draft based on the size of your league and your draft position.  Each round will show you all the players that are available between your current pick and your next pick, sorted by their value (instead of draft position or ranking) so the most valuable players will be at the top of each list!  Draft Mode is for snake drafts (example: 1-10...10-1...1-10) only! 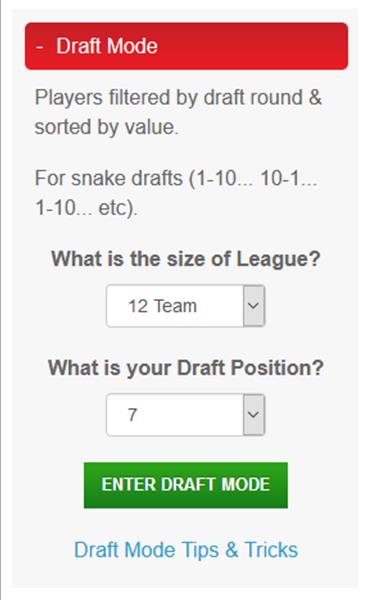 First, when you initially enter the app there will be a series of welcome screens.  The last one will ask you if you want to enter Draft Mode?

The other way is from the app itself, just click the "Draft Mode" button and it will open up and look like the image on the left.

2.  What is your draft position?

PLEASE NOTE:  If you are using the free version of the app, you can only select the 12 team league for draft mode.  Subscribe to get full access to the app!

When you enter draft mode,  the area I've circled will appear on the screen.

At the top you will see how draft mode is set up, in this case it's a snake draft, 12 team league and you're picking 7th.

Below that are tabs.  The numbered tabs represent each round of your draft.  So if you want to see what players are available for you to pick from in the 5th round, just click on the #5 tab.

There's also a button to view the "Top 12" players and a button to "Exit Draft Mode" and go back to the full list.

How Do I Know Which Player To Pick?

Each Tab in Draft Mode represents a round in your draft.  In each round you will find all of the players available between that pick and your next pick with a little bit of overlap.  This means if you're picking 7th in a 12 team league, tab #1 will show you all the players with an expected draft Position between #5 and #19.

1.  All of the players in each round are sorted by their VORC Score (Value-Outlook-Reliability-Consistency, click the link to see how the VORC score works) instead of their draft position.  The players earn points based on how they score on these 4 traits.  The highest scoring players will be at the top of the list.  Generally stay away from players on the bottom half of the list.  I also provide my recommended players for each round to help you out.  The maximum score a player can receive is 90 points, the worst a player can score is -60 (players will rarely score to either of these extremes).  The reason a player can have negative VORC points is because it will score negative points if they rank poorly on any of the 4 traits (for instance, a player with low reliability scores -10 points on that trait which will offset positive scores on their other traits).

2.  VORC is a relative score for each round.  The value component of the VORC score make comparing between rounds difficult.  So a player that scores 50 VORC points in round 1 is not the same as a player that scores 50 VORC points in round 10.  The Value component on the VORC score is calculated from your draft pick, so that means if you pick 8th, the first round player's VORC score is #8 less the Player value rank.  However, the 10th round player's Value score is calculated from your pick #108 less that player's value score.  If the same player appears on two consecutive rounds, you will see his VORC score is higher in the second round because the pick # is higher but the value rank is the same.

3.  Longshots and Reaches will help you determine when you need to take a player.  A longshot (gun icon) is a player that has a 50% or less chance of being available during that round.  If a longshot has a higher VORC score than my recommendations and they are available at that pick, you should choose that player instead.  Reaches (hands icon) are players that will generally be longshots on the Next Round.  Reaches will be included in the recommendations but longshots will be excluded from recommendations.  If you really like a player that has a reach icon next to their name, then you should take that player early, but you can choose to gamble and wait for the next round (just know that best case scenario is a 50/50 shot).

4.  You don't have to take my recommendations!  You can minimize the recommendations by clicking the "X" button on the top right of the recommendations box.  I've noticed that depending on what kind of scoring system you use, certain types of players will score higher like receivers in a PPR league.  If you want to look at what Running Backs are available, just use the position filter for RBs and you can select a runner with a high VORC score instead.  As an example, I like to take an elite RB in the first round instead of a receiver, so I tend to bypass the recommended players and choose the RB with the highest VORC score.

How Do I Keep Track Of Players That Are Already Selected?

You don't need to worry about it.  What you are viewing is a pool of players at each round.  Looking at the above example, the 5th round is pick #55.  Draft mode is going to show you all the players with an expected Draft Position of #54 to #67.  Essentially, the group of players you are looking at will all be gone by the time your 6th pick rolls around (pick #66), so tracking which players have been selected is not necessary. 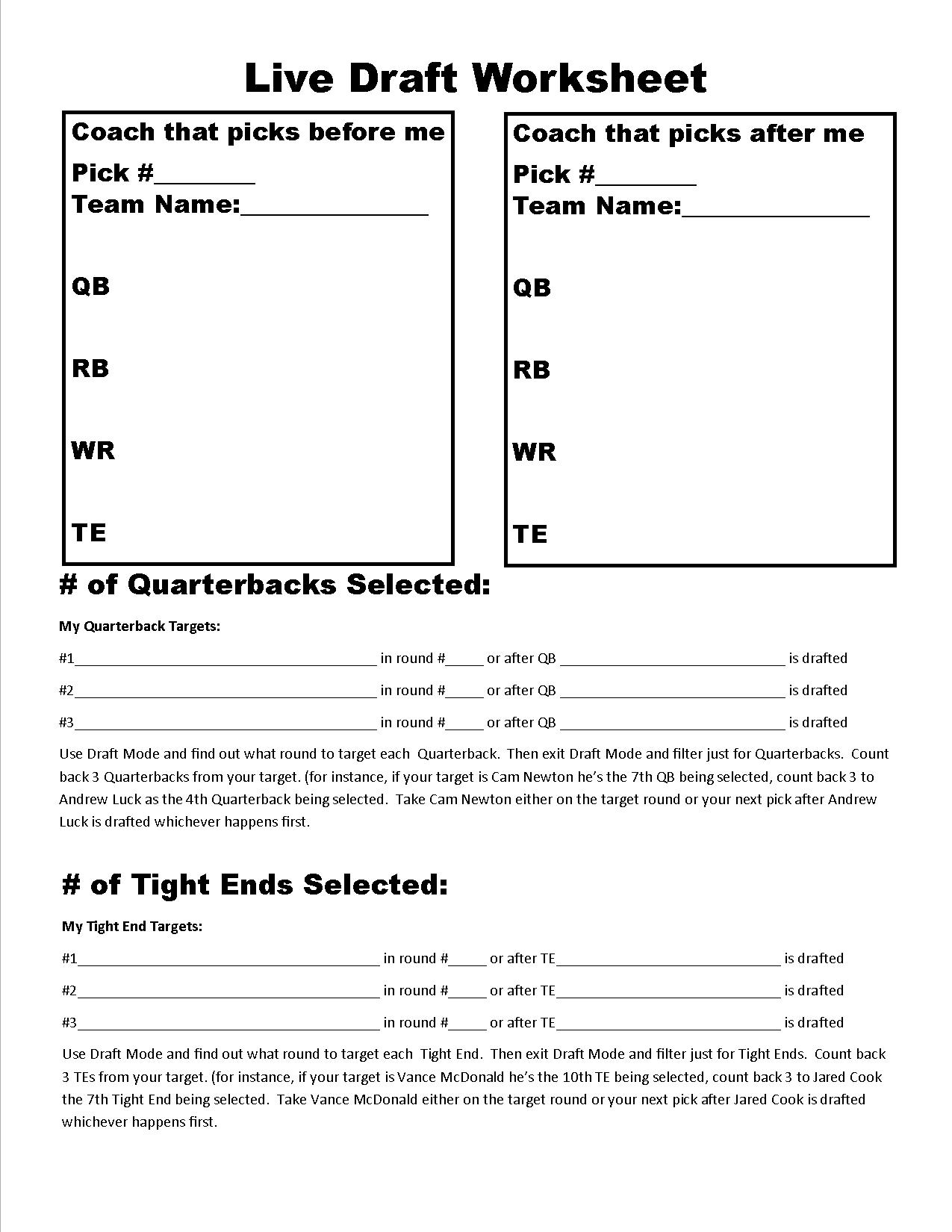 PRO TIP:  Instead of tracking what specific players have been selected, I keep a piece of paper next to me and mark off how many Quarterbacks and Tight Ends have been selected.  I also keep track of what positions the coach right before me and right after me take (QB, RB, WR, TE) as that will help me have an educated idea as to what players they still need to take (as an example, if I see the player that selects after my next pick has 3 running backs and no receivers, I can be reasonably confident that this player will select a WR with their 4th pick.  This means if there's a receiver that I like I should take them with my 4th pick because there's a good chance this other coach will take a receiver with at least one of his next two picks before it comes back to me.  Here is an example of a Draft Mode Worksheet that you can use for your next draft.

My app uses an algorithm to determine the most likely draft position of each player.  Every draft is unique and there's always a few players that get taken super early (and there's a few that are available much later than expected) but for the most part you will have an accurate idea of what players will still be available at each round of your fantasy draft!