What Is The VORC Score? 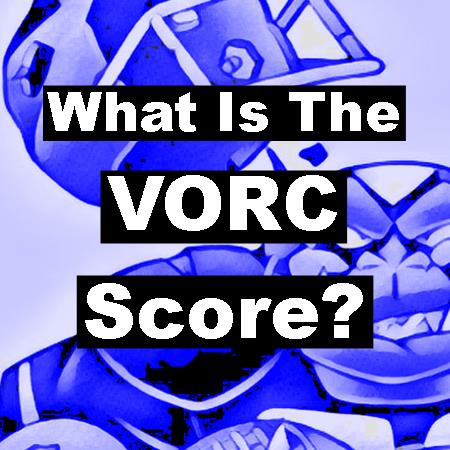 For the current year, I have enhanced the way the players are ordered in Draft Mode based on the four key stats - Value, Outlook, Reliability, Consistency.

You will only get the VORC score while in Draft Mode because the Value score is based on your draft pick for each round.

The VORC score will range from 0-100.  It is very hard to earn VORC points and players can earn negative VORC points if they score particularly bad on one of these stats.  When evaluating players while in draft mode, I consider any player that scores more than 40 VORC points to be a good choice for your fantasy team but I prefer players that score as many VORC points as possible.

Here is how the score is calculated. 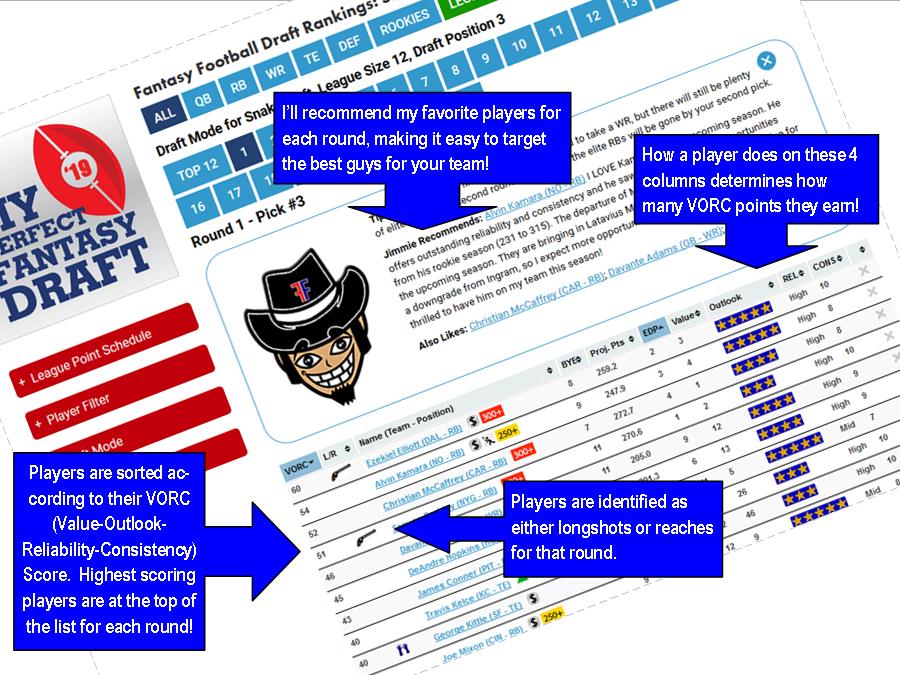 So the highest score a player can receive is 100 points and the worst score is 0 points.  These are also relative scores based on what round you're looking at.  So a player in the first round and a player in the 10th round might have the same VORC score but the first round players are being ranked according to your draft pick #5 but the 10th round players are are being based on you draft pick #116.  That's why you only see the VORC score in Draft Mode.

NEW THIS SEASON:  You can restore any player from a prior round into the current round in draft mode and it will adjust the restored player's VORC score as if they made it to that round.  This will allow you to properly evaluate any longshots that stay on the draft board longer than they should.  Below the list of players is a list of Removed Players.  Click "Undo" to restore that player back onto the draft list.   As an example, Robert Woods currently scores 56 VORC points in the 3rd round of a 12-team, Half PPR, picking 6th.  Woods is currently going at Pick #31 so he is on Removed Players list in the 4th round because that is at pick #43.  I can restore Robert Woods into the 4th round on the app and it now calculates his VORC score at 69 Points because it adjusted the value portion of the VORC score for Woods based on a 4th round pick (pick #43) versus a 3rd round pick (pick #30).  This will help you properly evaluate any longshots that stay on the draft board versus the other players typically going in that round.

If you hover over the VORC score you will see the breakdown of how that player scored on each of these four stats.

The VORC score is designed to savagely punish players that don't score well on any of the criteria, that is why there are negative scores on all four of the critical stats.

Finally, each round in Draft Mode has some crossover with the round before and the round after.  Players that have less than a 50% chance of being available in this round are considered LONGSHOTS, they have a pistol appear next to their name.  If a longshot is still available and they have a higher VORC score than the recommended players, take that player.  In the above example, you see both Saquon Barkley and Ezekiel Elliott as Longshots because their Expected Draft Position is earlier than the draft position #5.

You will also see players with a REACH (hands icon) next to their name.  The REACH icon will appear for those players whose Expected Draft Position is very close to your next round pick.  The players listed with a REACH designation on one round will usually be LONGSHOTS on the next round.

I also provide you with up to three recommended players giving you options for who to select each round.