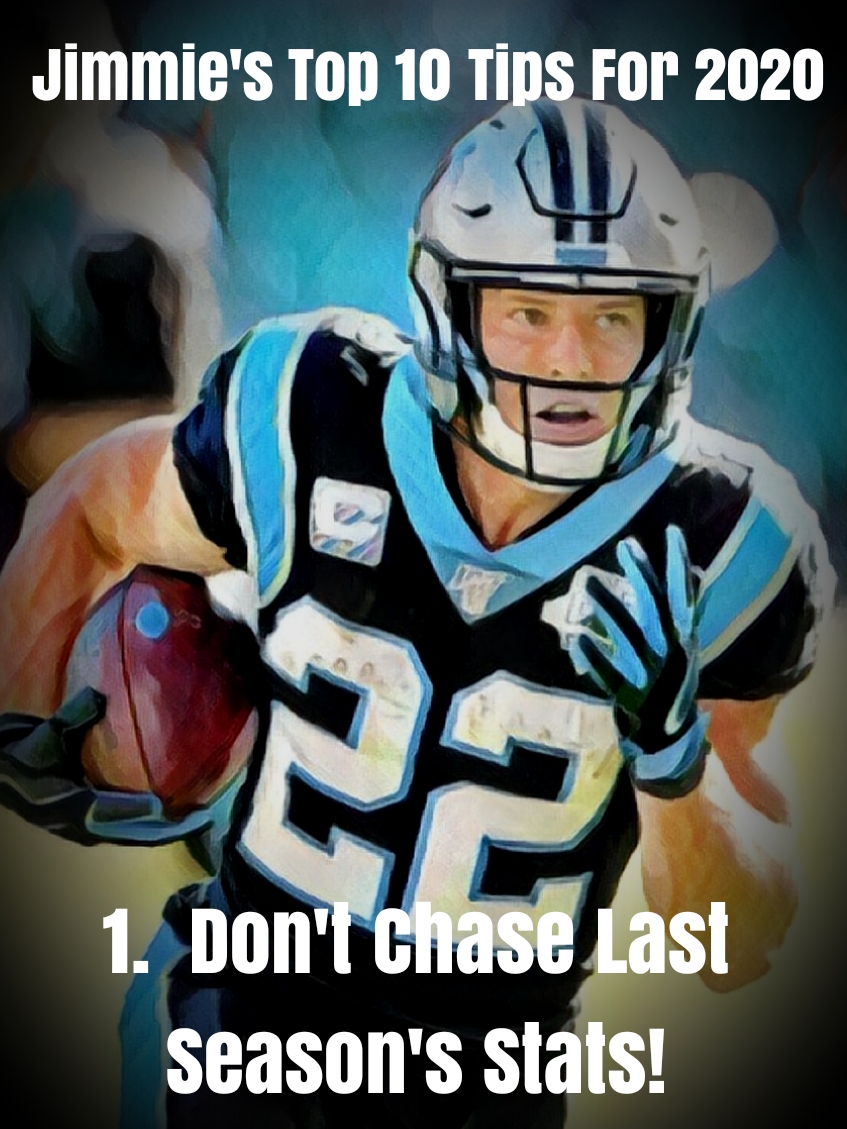 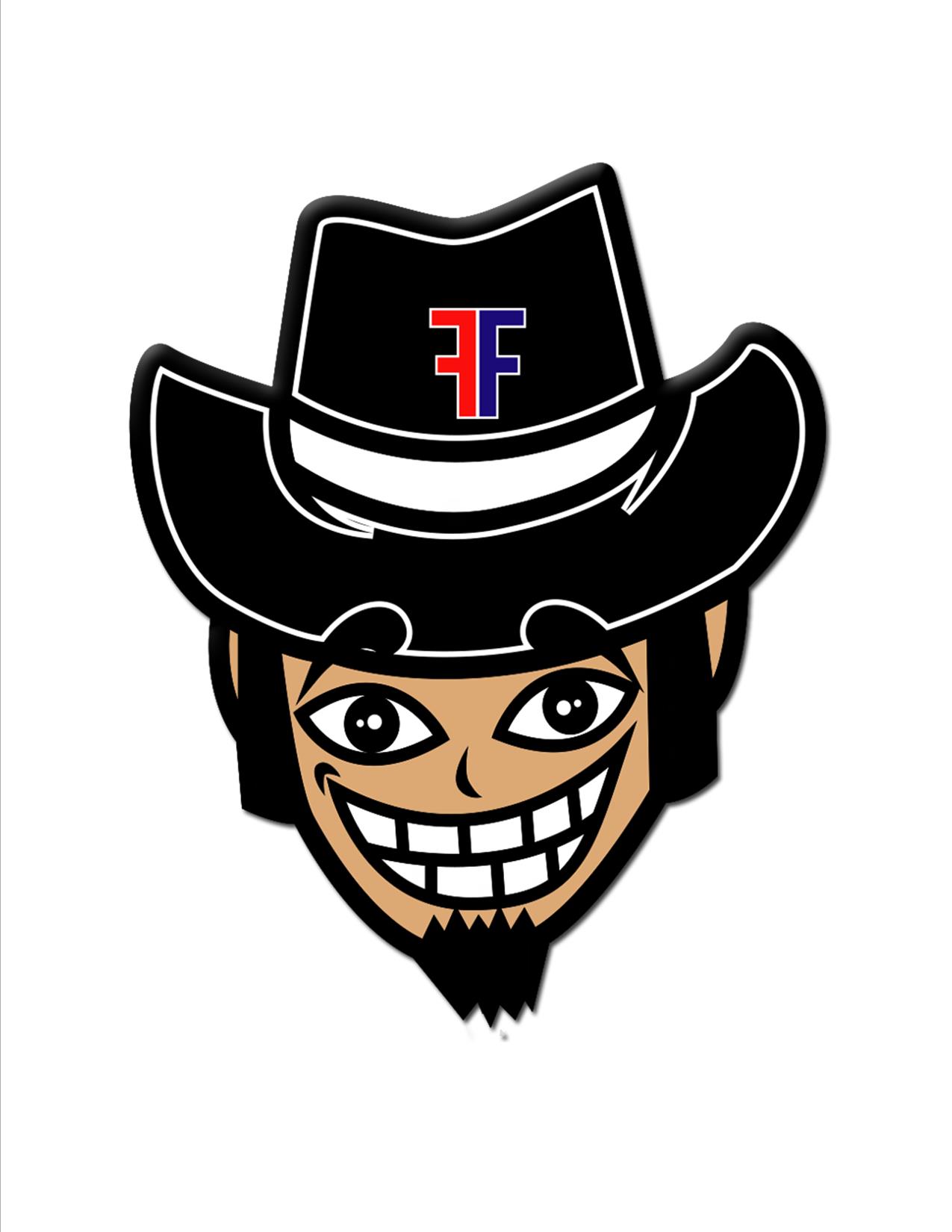 Hello, Friends!  We’ve got another exciting season of fantasy football coming up and it will be here before you know it.  I’ve decided to compile my top 10 tips for the upcoming season.

1. Don’t chase last year’s stats.  Often with fantasy analysis it’s just copy and paste last year’s results for the upcoming season.  Players that had record breaking seasons like Lamar Jackson, Michael Thomas and Christian McCaffrey will all be snatched up very quickly in the draft, but it’s very difficult for player to repeat a record breaking season.  In 2018, players like Patrick Mahomes, Saquon Barkley and George Kittle had record breaking seasons.  Last season their per game production declined by 15-20% and they dealt with injuries to boot.  In the end, all were massive disappointments relative to their draft position.  I always look for upside, find players that can do better this season than last! 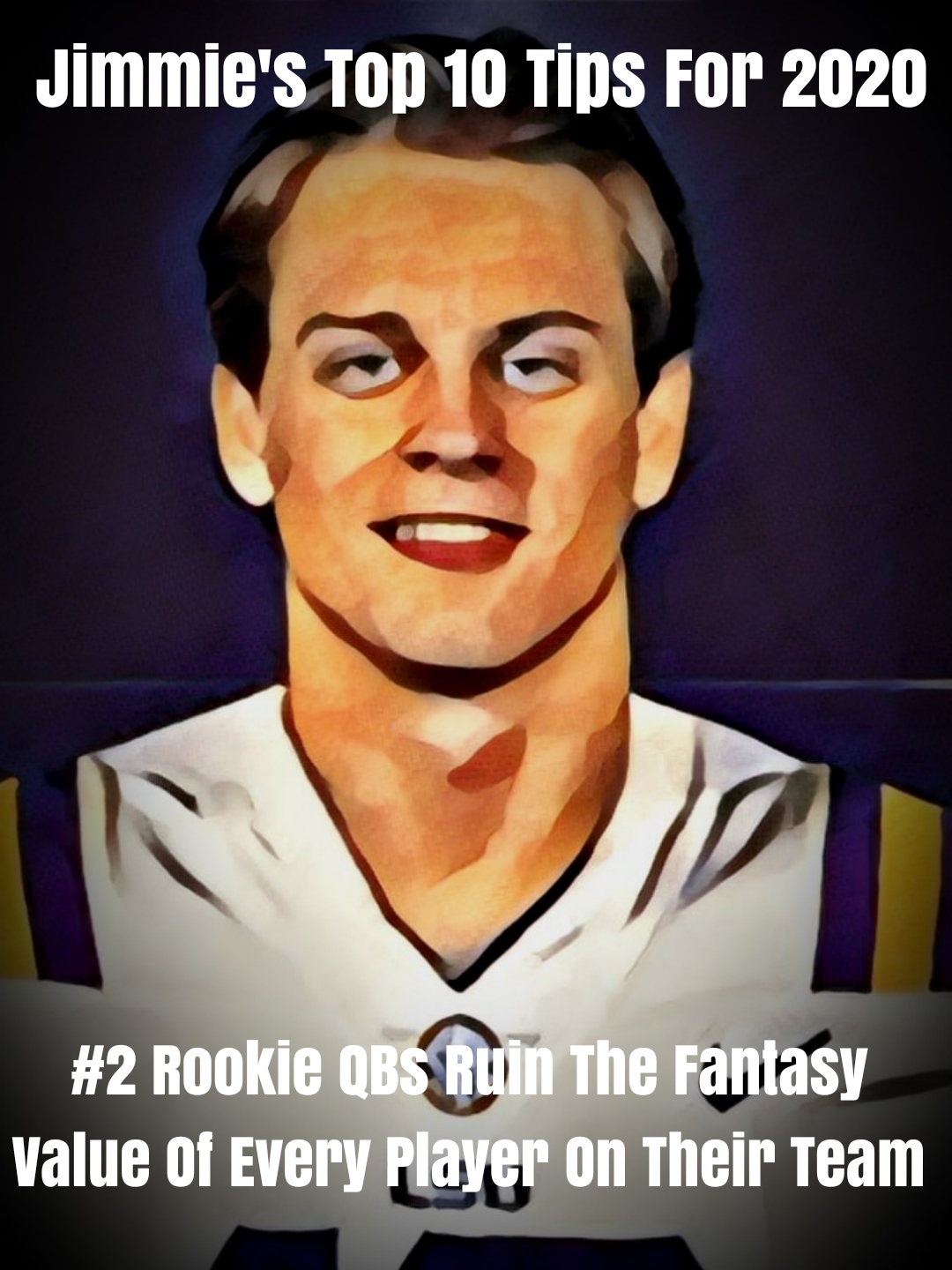 2. Rookie QBs Ruin The Value of Everyone On Their Team for Fantasy – The reason Rookie QBs are so bad is because they usually have a low TD total (around 20) and a high interception rate.  That limits the value of all the receivers and runners on those teams.  When you look at last year’s rookie QBs, Kyler Murray was very good but the others: Dwayne Haskins, Daniel Jones, Garner Minschew were not great for fantasy and their support staff.  This year you have Joe Burrow in CIN, Tua Tuagovolla in MIA and Justin Herbert in Los Angeles.  IMO you should just steer clear of all the players on these teams.  I downgrade all players associated with rookie QBs in My Perfect Fantasy Draft. 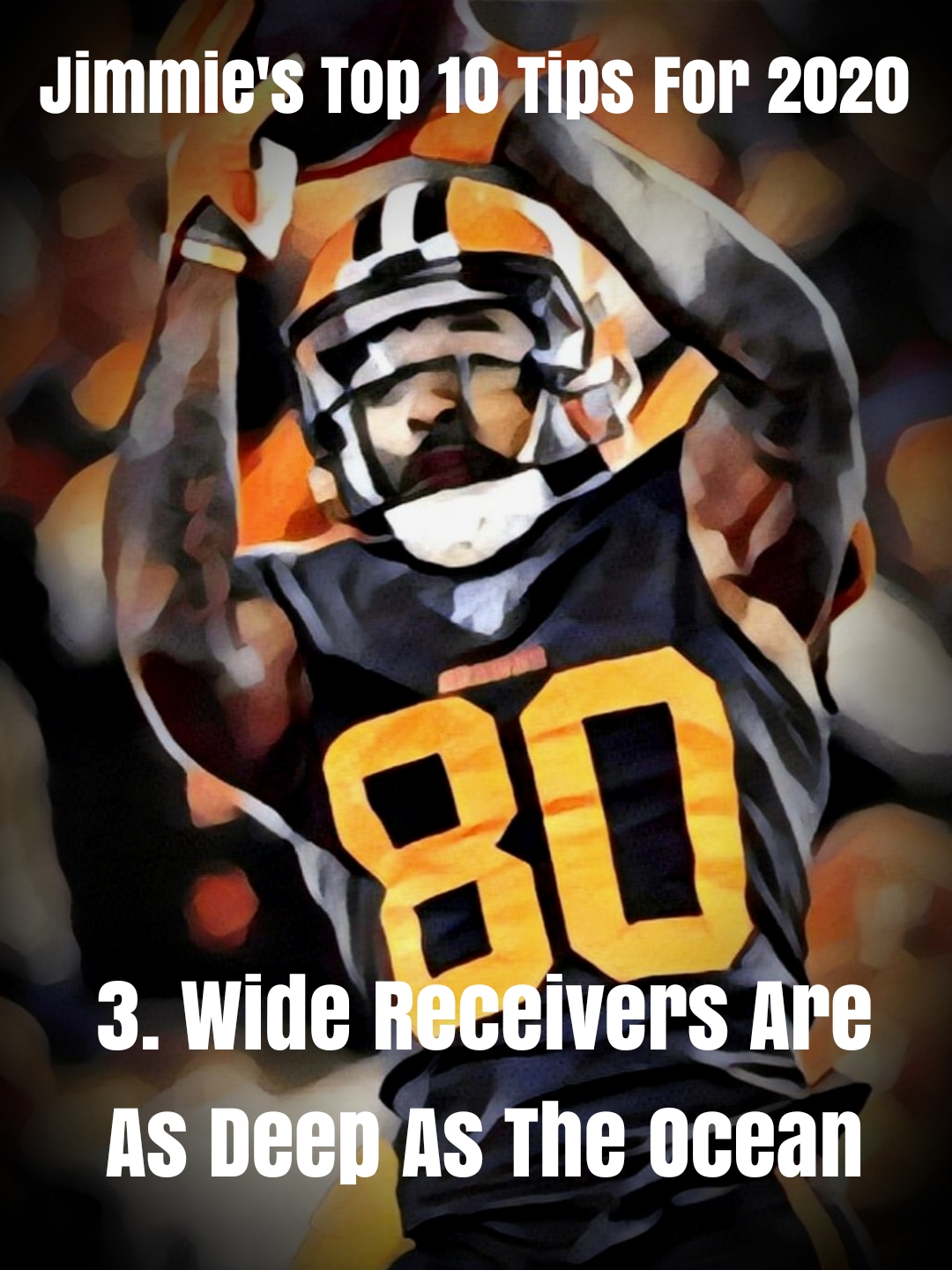 3. Wide Receivers are as Deep As The Ocean – Last year was a terrible year for Elite Wide Receivers. Also we have a historically great class of Rookie WRs entering the league. Because of these issues, the WR position is deeper than it’s ever been.  I also see a real possibility that two QBs and two TEs will be selected in the first two rounds of the draft, that's going to push elite receivers to the third round of most drafts.  In the past I've recommended spending your second round pick on an elite receiver but this year it's not necessary.   You can wait until the 3rd or even the 4th round to take your first Wide Receiver.  Spend those early picks on RBs. 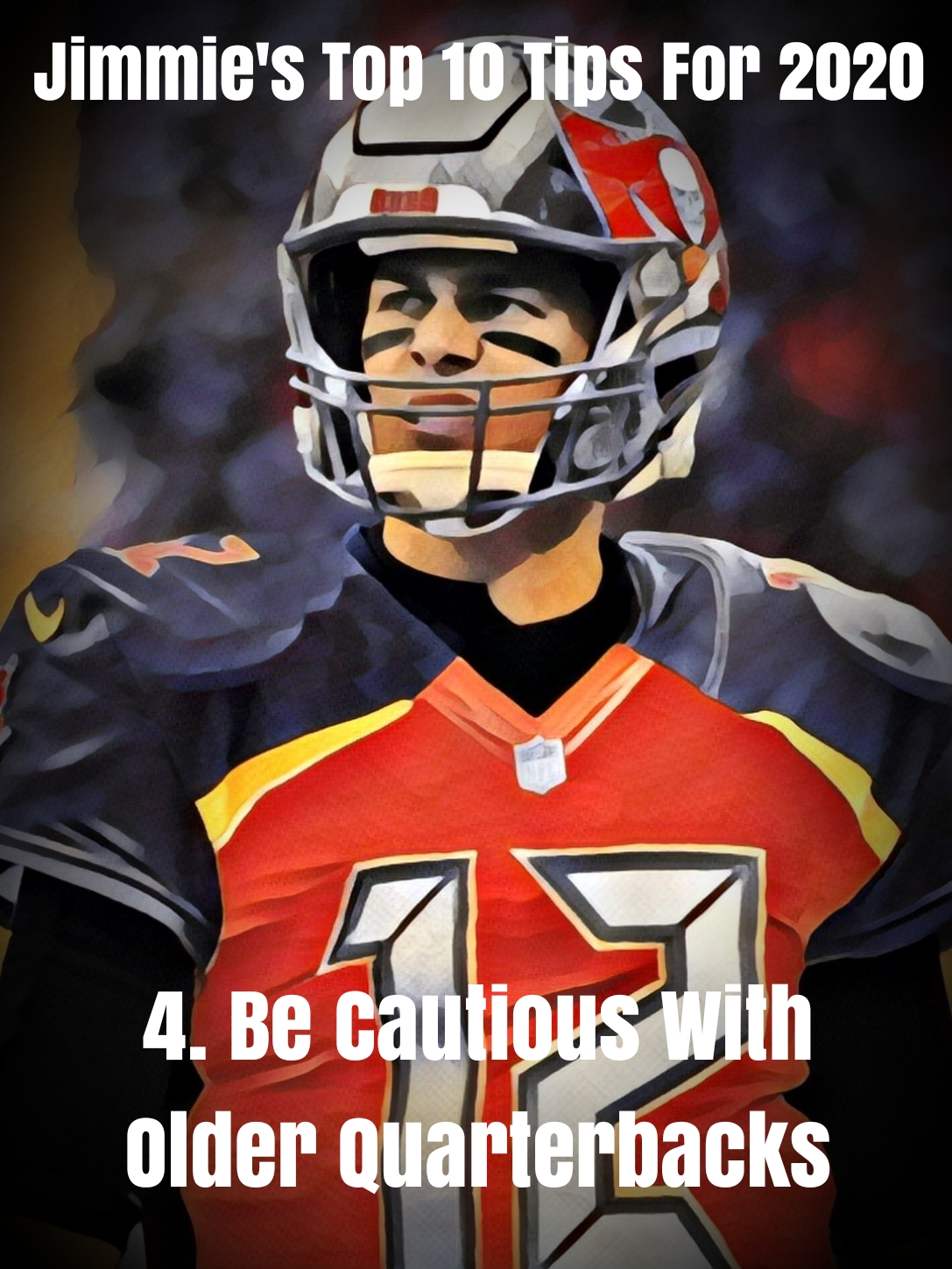 4. Be cautious with older QBs.  We live in a unprecedented time for QB longevity.  Tom Brady and Drew Brees have completely broken the mold for the length of a career.  It’s important to note that this is not normal.  Quarterbacks tend to hit the wall in their mid to late 30s somewhere around their 16th season.  What happens is their brain sees openings that their body can no longer deliver.  All of a sudden their interceptions increase and their Yards Per Catch and TDs decline.  Last year Eli Manning decided to retire and Philip Rivers saw his stats go into the toilet.  Ben Roethlisberger suffered a season ending injury in game 2 but those first two games were horrible.  Now Rivers is on the Colts (on a 1 year deal) and Roethlisberger is working on coming back but as far as I’m concerned these are two teams that you need to steer clear of.  The Quarterback is an extremely deep position and there's no reason to take on the age risk here when there are so many viable QB1s that don't have that risk! 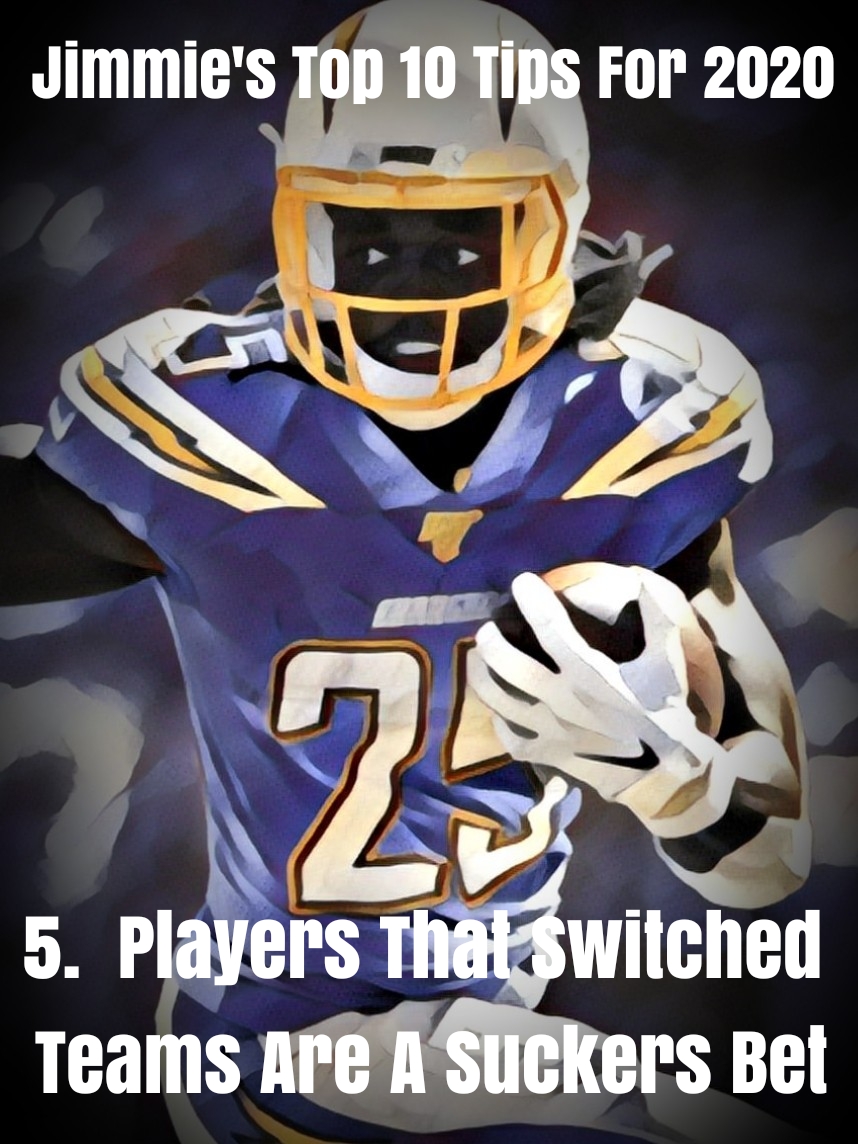 5. Don’t Draft Players that Switched Teams during the Offseason.  What do the following players have in common?  Le’Veon Bell, Mark Ingram, Tevin Coleman, Jared Cook, Latavius Murray, Donte Moncrief, Jamison Crowder, Tyrell Williams, DeSean Jackson and John Brown have in common?  They all switched teams and with the exception of Ingram and Brown, they all sucked for fantasy.  It’s like this every year.  One or two will have a good season and the rest will be hot garbage.  This year the list includes:  Tom Brady, Rob Gronkowski, Melvin Gordon, Austin Hooper, Jordan Howard, Emmanuel Sanders, Robby Anderson and Eric Ebron.  One of these guys will be great, but you’re probably going to pick the wrong one! 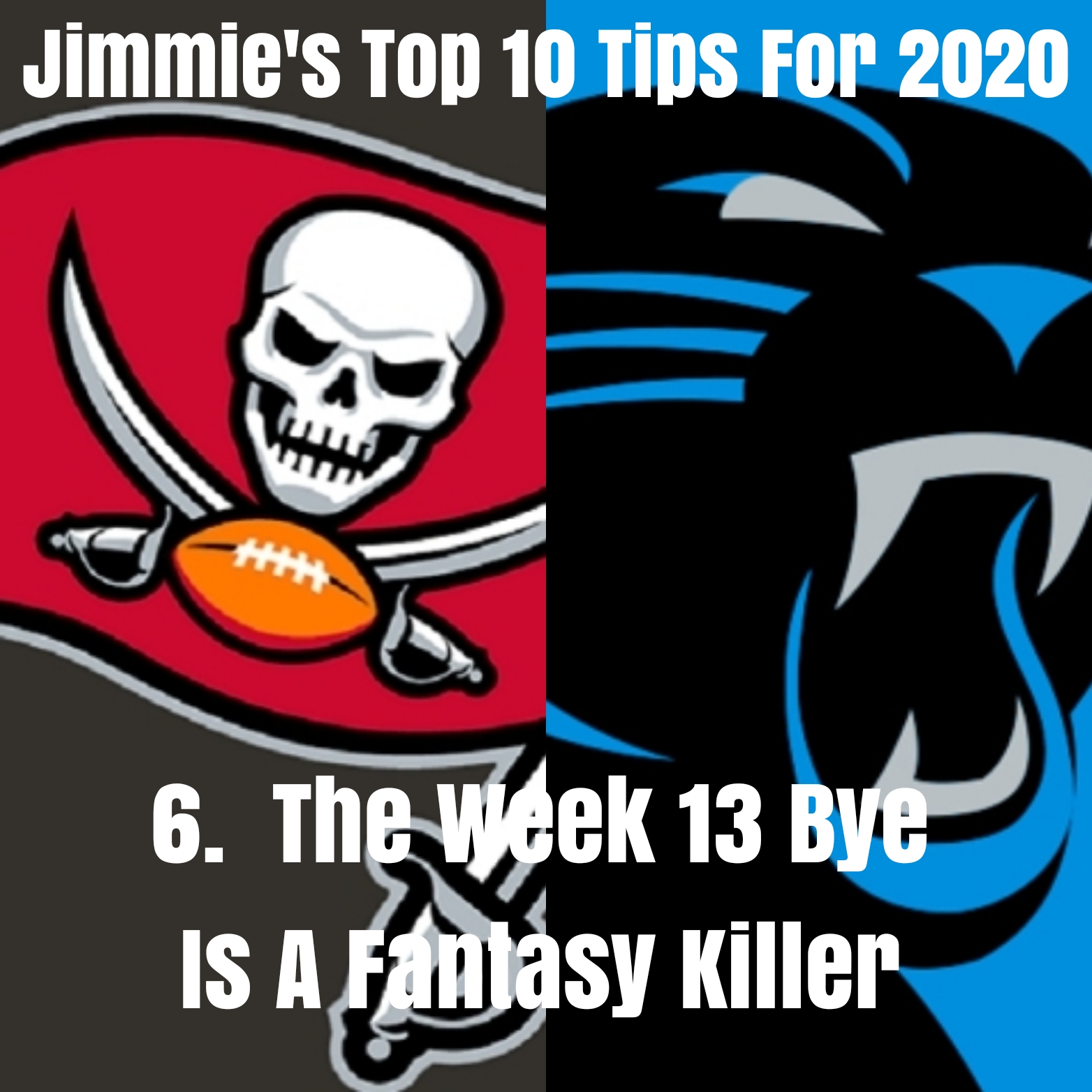 6. Beware The Week 13 Bye.  Week 13 is a critical week in the fantasy season.  It is typically the last week of the fantasy season before the playoffs start and you don't want to be in a position where you need to win in order to make it into the playoffs.   Many leagues start their playoffs on week 14 and this is the last week to make one of those critical playoff spots.  In the FFPC (Fantasy Football Players Championship), week 13 is the championship week for their tournament leagues.  This year there are two teams that have a bye week in week 13.  Tampa Bay and Carolina.  Both of these teams are loaded with huge fantasy players:  CMC, Tom Brady, Chris Godwin, DJ Moore, Rob Gronkowski and Mike Evans are players that will not be playing on this critical week.  I’m not sure I want to bet my season on these guys on such a critical week.  This is less of an issue if your playoffs don't start until week 15.  However, I have downgraded these players outlook 1 star in my app to reflect this added risk. 7. Don’t Trust What Coaches Say, Trust What They Do Instead – Coachspeak is mostly bland platitudes and hype.  When I hear a coach talking about a player, I just tune it out.  When a coach says “He’ll definitely be ready for week 1” that means he most certainly will not.  When it comes to injuries, I need to see a player be listed as a full participant in practice in order for me to remove his injury designation.  Likewise I don’t care when a coach hypes his new free agent acquisition, instead I look at what kind of contract he signed.  There’s been plenty of hype around Philip Rivers and Todd Gurley but all I see are two players toward the end of their careers that were only able to sign 1-year contracts.  If the coaches had more faith in that player, they would have gotten a better contract! 8. Target Contract Year Players – I make no secret that I love contract year players because Hungry Dogs Run Harder!  Specifically, I like players coming off their rookie contract.  That’s when the big paydays happen and that’s when the player will be most motivated to perform well.  My Perfect Fantasy Draft identifies all players on a rookie contract year with a gold dollar sign if their contract expires after this season and a silver dollar sign if the contract expires after the 2021 season.  They get a boost to their outlook and are awesome players to target for fantasy.  Dak Prescott, Austin Hooper, & Derrick Henry were all contract year players last season.

9. Target Bounceback Players – This is a new icon in My Perfect Fantasy Draft this season!  What is a bounceback player?  He's a player that underperformed on a key metric last season (like Touchdowns) and because of that they get a nice discount on the draft board.  Last season you had down years from players like Saquon Barkley, Alvin Kamara, Adam Thielen, Le’Veon Bell, Robert Woods, Kareem Hunt and Matt Ryan.  These players are marked with the bounceback icon (green upward bouncing ball) and they get an upgrade to their outlook.  I love the value and upside these players will bring to your fantasy team! 10. Watch Out For Players That Signed A Huge Contract Extension.  Remember how I said I love hungry dogs because they run harder?  Well these players are now well fed dogs!  This is what happens the year after a contract year.  Many players signed huge contract extensions and now I expect their production to slump in the upcoming season.  I call this the Big Contract Hangover and it’s for players that sign a multi-year contract extension after a contract year (players that get the franchise tag don't get this designation).  In my app, you’ll see all these players marked with a red martini glass so you know who got the big paydays.  A player’s outlook is downgraded slightly when they get the big contract hangover icon.

My app is going to help you win your draft.  You can build a fully customized draftlist in minutes and the app will break the draft down, round by round and help you find the best players at each pick of your draft!  Sign up and subscribe today!